A Certified Groomer with I.P.G., Nancy is a member of the Wahl Canada Xtreme Groom Team and Soos Pets Grooming Expert, and has been an active member of the Ontario Dog Groomers Association since its founding. She served as president from 1990 to 1993 and serving again as current President since 2017. She was voted their Grooming Personality of the year for 2000, 2002 & 2004.

Nancy Bryson has been grooming since 1976. She owned and operated Bryson Academy of Grooming/Dogs by Bryson Professional Grooming Salon in Caledon East, Ont. where she taught both the beginner and the professional, from 1995 to 2008. She currently operates Dogs By Bryson Professional Grooming salon and instructs professionals in skill advancement workshops. Nancy is a member of the advisory committee for Sheridan College’s “Animal Care Veterinarian Technician Program”

Nancy had an impressive win record, undefeated in the Terrier, Sporting and creative categories. She is well known in the Canadian industry for her scissoring and creative styling. In 2009 Nancy became the first recipient of the Paws Way Centre’s Groomer of the year award. For 2010 Nancy received the Paws Way’s most prestigious award “Participant of The Year”. Her professional credentials have earned her work as an industry demonstrator, speaker, judge and involved with product development with industry manufacturers like Soos. Pet Products. She has appeared and done work for T.V., Disney and national Magazines.

Nancy will be on hand along SOOS throughout the weekend answering questions and speaking about her passion of grooming. 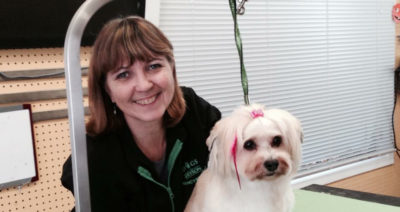